The below are shown pictures of the new book entitled about poems as a "Diwan-i Jahan-shah Haghighi (Hakyky)" with the turkmeni classical alphabet. The text is written Arabic - Persian turkmen alphabetic. This book has been published by the publications "Behjat". The brief description of that book here inserted:
- "Diwan-i Jahānšāh Haghighi" Writing and Research: Dr. Hangeldi Ownuuk, publication: "Behjat", printed: Gulshan, Tehran, 1392 (2014), pp. 248.
*******************************


*
This version of "Divan Jahanshah Haghighi" based on handwritten manuscripts in the library of the Academy of Sciences of Armenia which is known as "Matenadaran Fund», was collected.
.
In the history of the world have a course titled "The historical Turcoman periods" which it refers to the "Turkmen Ghaznavids, Seljukids, Kharazmshahian, Qara Qoyunli and Aq Qoyunli". After the recent dynasty, groups of Turkmen tribes, with a conversion to the other religions in century XV, such as the Safavids, Afsharian, Bigdelies and Usti Tachli (Ustachlu), Qajar, Zu Al-qadrs and ... But, in the period of Safavid, changing the course of history has.

This period of history in cultures of historians, traditionists and scholars worldwide to "The historical Turcoman Period" is known. (... This period starts from Chronicles Bayhaqi.).

This discussion of the topic, the latest period of the "The historical Turcoman Periods" that are concurrent with the Renaissance in Europe in the transition to the new period of the century.

In this book, we will be describing about the works and biographies one of the brave kings Turkmen "Jahanshah Qara Qoyunly" the pen name is on the "Haqyqy" who lived in the XIVth century.
So it is dedicated to the studies of the history and artifacts related to the King and also to study around the different periods of histories and literature, especially about the Turkmen Oghuz and their literature veterans, like as Jahanshah Haghighi, Imad Ad-Din Nasimi, Abdurrahman Jami and etc. have been done.
A copy of the microfilm of the manuscripts that was the transition from Armenia to Turkmenistan.
This manuscripts in the Academy of Sciences of Turkmenistan, in the Institute of Manuscripts by the Dr. Rahman Rejepov (PhD in Linguistics of the Academy of Sciences of Turkmenistan) and the layout by the Director Institute of Manuscripts Dr. Anna Qurban Ashirov in 1999 - Ashgabat, with the Turkmen-Russian alphabets (Cyrillic or Cyril) was translated and printed.
In the top of the article are shown pictures of the new book entitled "Poems of Jahanshah Haghighi" by the Turkmen classical alphabet. (the text poem is written in the Turkmen language with the Arabic-Persian alphabets) which it included 62 pages of the book, about the life and biographies of Poet "Haghighi" in the Persian language. 86 pages are poems. And had offered fresh information.
This book has been published by the "Behjat" publication, that here have inserted. 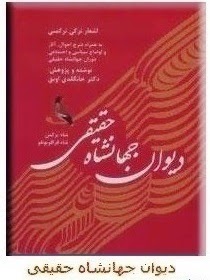 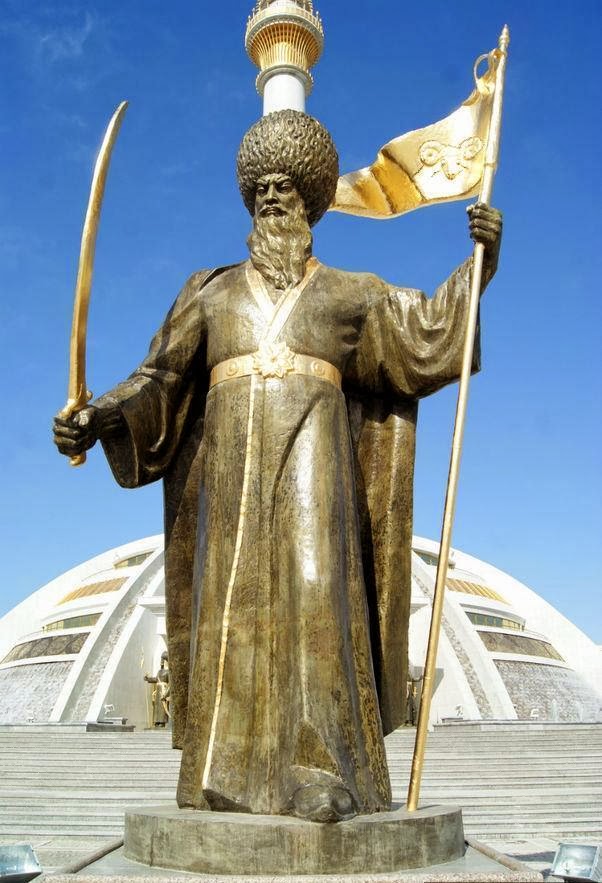 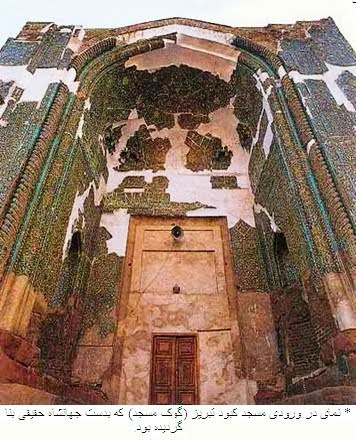 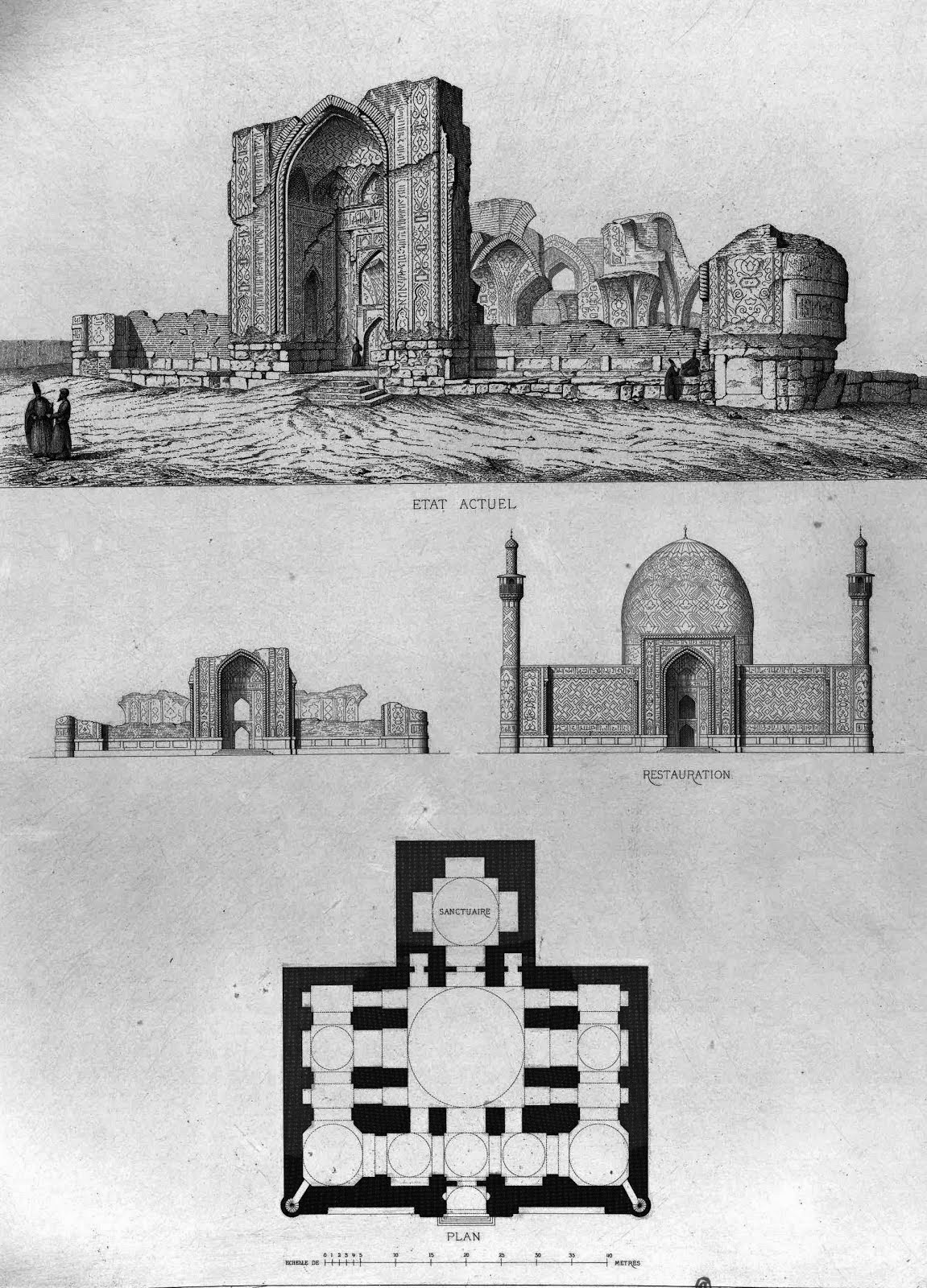 گؤک مسجد قبل از بازسازی در اوایل قرن بیستم
The "Blue mosque" before reconstruction at early 20th century. The mausoleum Jahanshah was built in the southern section of the mosque and is entirely covered with high marble slabs on which verses from Quran are engraved in Thuluth script on a background of fine arabesques. 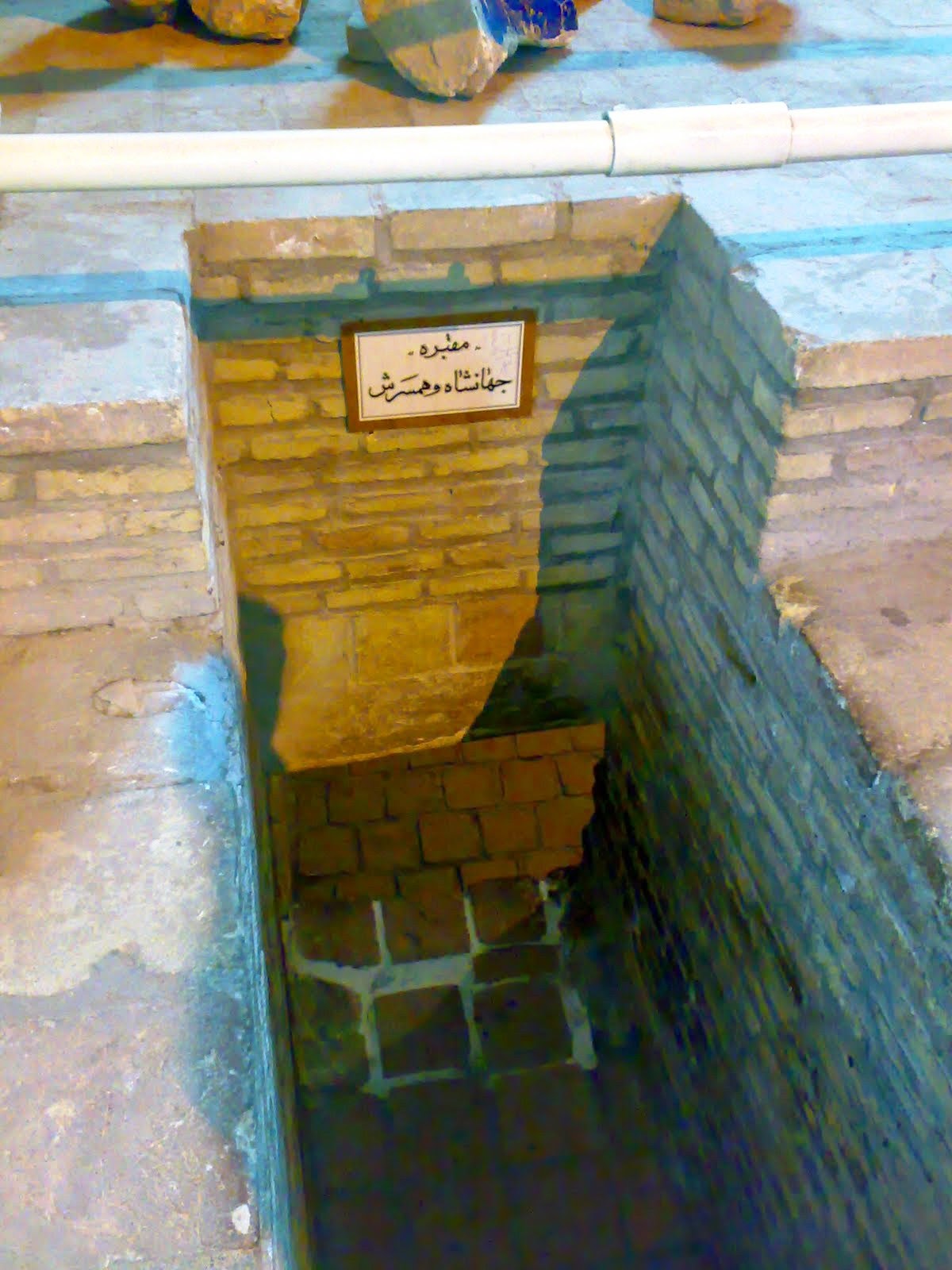 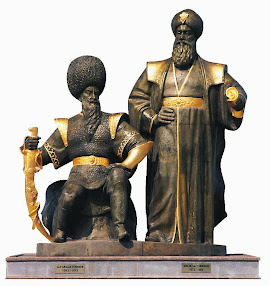 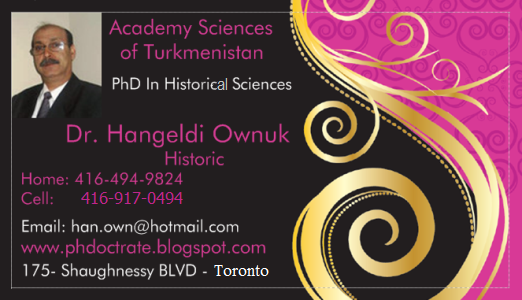 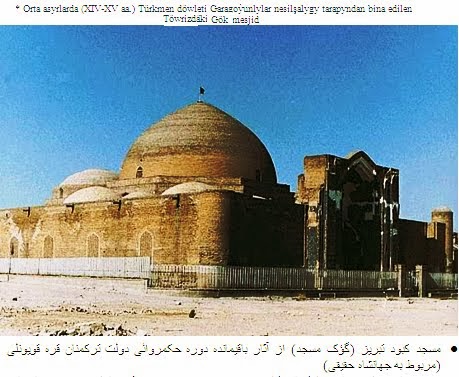 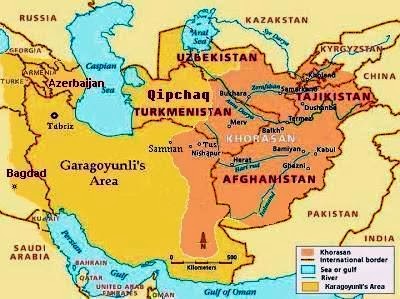 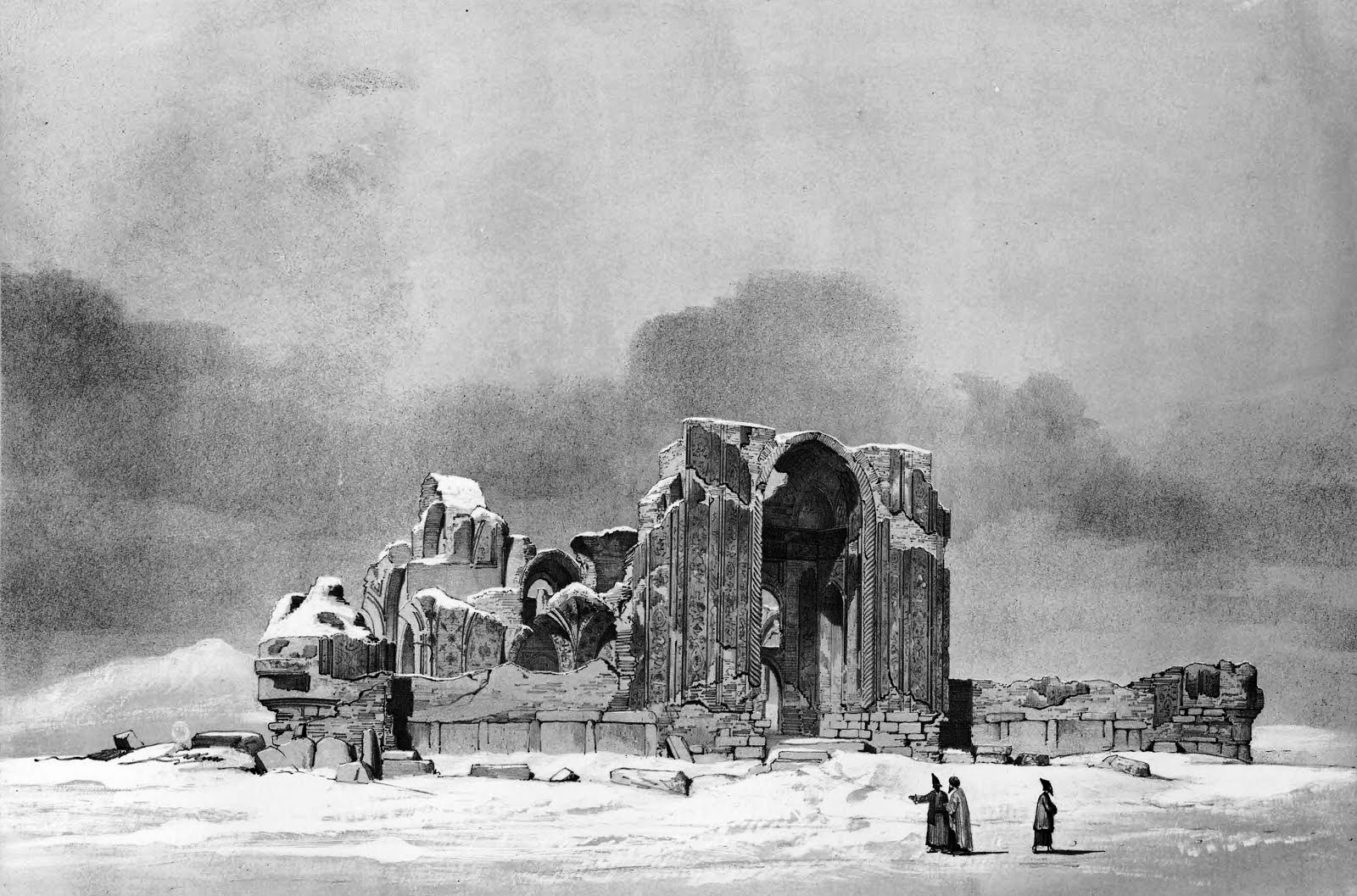 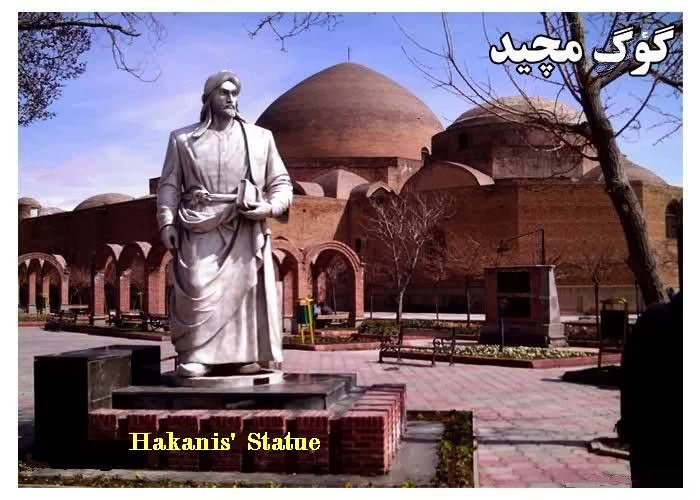 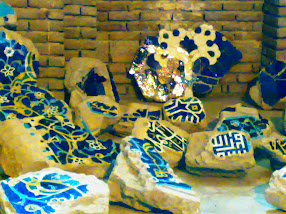